Despyre hails from Long Island, NY, and is made up of five seasoned musicians who’ve been influenced and cultivated in the shadow of the long traditions of NY heavy metal. The core philosophy that drives Despyre is the combination of two emotions that forms the basis of their name, despair and inspire. 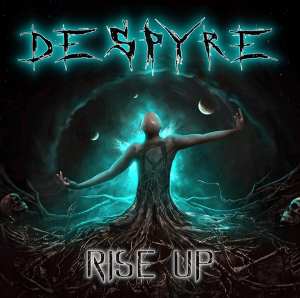 The band’s mission is to encourage those who have reached a point where life has lost its spark through driving, melodic, and hard-hitting music.

Their latest installment, Rise Up, is an album steeped in old school heavy metal, which produces a classic sound with a modern twist. The new album is being released on June 7, 2019 through Pavement Entertainment.

Your friends at Industry Music Magazine first caught up with Despyre quite some time ago at The Loft at The Chance Theater in NY. You can check our show photos on our Facebook page. So here we are, a brand new Despyre album. 3 words, OLD SCHOOL METAL. But its fresh. So wait, how many words is that? Straight forward beat, strong groove, vocals that compliment the melody. There is a nice mix of heavy, in your face kick ass, with some more melodic, mellower tunes. “DRU” is killer hard driving, in your face track. It has a break riff throughout. On the flip side “Blue Sky” (Reborn) is a beautiful duet with a warm ominous undertone. The album is basically a mix of those two examples, and as always the lyrical content is as their name suggest.

View all posts by friskettiphoto